Designing sparefully – a manifesto of sorts

Have nothing in your house that you do not know to be useful, or believe to be beautiful.

Tiny house design forces you to consider every square inch. If you’re going to live in something smaller than a parking space, each structural element and object needs to be there for a reason. There’s not a lot of room for that broken vacuum cleaner gathering dust in the basement, that unused dining room, or that guilt-producing Wii fitness program that seemed like a good idea at the time.

As I’ve embarked on the design for my tiny house, I’ve thought a lot about the concept of spare.  It’s an awesome word, one of those rare cases where it means both one thing as well as its opposite. Scant, frugal, economical, minimal, but also: being in excess of present need, to give or to lend without inconvenience or loss, such as “spare change” or “spare time”.

All of these meanings apply to tiny housers who downsize to small, simple dwellings, often built on very tight budgets. At the same time, without soul-crushing mortgages and high monthly utility bills, they have more time and money to pursue the lives and careers they really love, to connect with those they care about.

Even better is the obsolete word spareful. Last spotted in the 1913 edition of Webster’s Dictionary, it means prudent and restrained in the use of resources. Many tiny housers are motivated by a desire to leave a smaller footprint on the earth. Much thought is given to building highly efficient tiny green homes to reduce energy consumption and carbon production. Materials are selected based on the least chemicals and lowest environmental impact in their manufacture. Roadsides and salvage stores are scoured for siding, windows and other items that can be reused.

Let’s dust the cobwebs off spareful and give it the honor it deserves! Breaking it down into its component parts, spare + full, gives a glimpse of just how meaningful the word can be. The pop phrase “Less is More” is similar, but what does it really mean and how can it guide us in our design choices? Let’s plumb the depths a little.

Whether you chalk it up to evolution or a divine artist, the natural world clearly knows a thing or two about designing sparefully. The pairing of essential form and function is evident in the sleek shape of the fox built for speed and agility, in the simple curve of a woman’s throat, in ripples of sand birthed by the pull of moon-induced tides. Everything is there that needs to be and nothing more. The results are typically beautiful and inspiring. 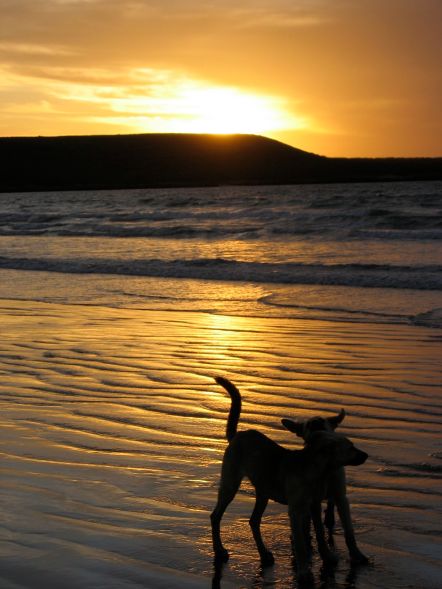 In music and art

Going spare in music is perhaps captured most fully in experimental composer John Cage’s piece 4’33”, four minutes and thirty-three seconds of silence (and yes, I do know that in Britain spare means crazy; not sure that changes anything – ha!). I went to a performance of this piece in college and the audience had no choice but to listen for what seemed like an eternity to the incidental shifting of the musicians on stage not playing their instruments, the ambient environment around us, and every squirm each of us made. It was rather grueling, but fascinating once you started to pay attention.

In addition to being influenced by the series of all-white paintings by his friend Robert Rauschenberg, Cage was inspired by a visit to the anechoic chamber at Harvard University in 1951. This is a room designed so that the walls, floors and ceiling absorb all sounds rather than reflecting them. Cage expected to hear silence but he wrote later, “I heard two sounds, one high and one low. When I described them to the engineer in charge, he informed me that the high one was my nervous system in operation, the low one my blood in circulation.” How cool is that? As with meditation, the more we can reduce extraneous noise, the more we can listen to what’s within and around us.

You don’t need to go as extreme as the Cage piece to appreciate the beauty of spare design in music. This morning a concerto for solo cello performed by Yo-Yo Ma was playing on the radio. Reduced to bare essentials, its stark notes were so pure and full of longing and loss, I nearly wept. It evoked something much larger than the mere sum of its few parts, tapping into the deep well of emotions we’ve all experienced. The simplest story is sometimes the most rich.

Not long ago, the Swedish vocal group Erato covered Call Your Girlfriend by Sweden’s queen of pop, Robyn. The video quickly went viral.

Why was this modest, homemade video lacking all production values so popular? After all, it’s just three young women singing in a kitchen, accompanied by empty butter tubs – pretty spare.

My guess is because it resonated with people. It recalled shared experiences of playing clapping games as kids. The song, while not complicated, is about a heart-wrenching social situation we can all relate to in some way or another. Plus there is just the simple pleasure of hearing sweet, harmonizing voices, in this case counterbalanced by the slight edginess of the lyrics.

Pairing essential form with function creates an inspiring sense of beauty. Silence makes us tune in to what’s important. Simplicity evoking deep emotions pulls at our souls. Resonance connects us. In a world that has grown far too complicated, this is the fullness that can come from being spare.

So how can these ideas in art and nature be applied to tiny house design?

In tiny house design (and life)

When most people encounter a tiny house for the first time, they are intrigued. They are drawn to the simplicity and lack of clutter. It evokes childhood memories of building forts. Whether or not a particular tiny house resonates with them depends on the way it is designed and decorated, whether they can picture themselves living in it. I’ve seen many tiny houses in person, in books, and online, and some grab me and many don’t. Each of us has a different sense of style and the trick to designing the perfect tiny house for yourself is to know what works and doesn’t work for you.

On a cold, misty gray day in late December, I met Dee Williams at her little house to talk about the conceptual designs I was working on. Stepping inside, my first impression was of the woods. Clad in cedar on the outside and tawny-colored pine on the inside, it smelled of trees. With shades made of twigs, rain smattering on the metal roof and warmth coming from a small heater, it felt a bit like entering a fox den. 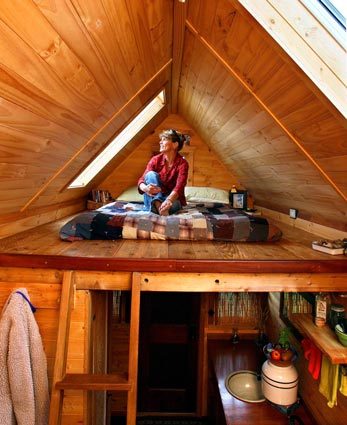 Dee’s house is a perfect example of spareful design. In fact, it’s a veritable haiku. One of the smaller tiny homes, it’s 12’ x 7’ with a 2’ porch. She also went minimal in terms of systems. She chose to go without plumbing, a refrigerator or oven, and only has a single stovetop burner. There’s a compost toilet and a simple solar set up. Many of the materials she used were salvaged and recycled, including her pine interior and many of her windows. Copper pipe is used as rods to hang things from; her countertop is made from a door she found. Built for $10,000, with low maintenance requirements and monthly utility bills less than two lattes even in winter, Dee’s little house has given her the freedom to be able to offer more to others.

At a recent tiny house workshop, Dee made the comment, “Design for who you really are, not the social construction you think you are.” She talks about playing anthropologist with yourself, to figure out what you really need (as opposed to what you think you want). In looking critically at her own lifestyle, she knew cooking wasn’t her thing so why put in kitchen gear she wouldn’t use? While some might find it hard to relate to this much paring down, or have the courage to actually do it, Dee, after more than eight years, is still happy every time she walks into her little house. That is what defines a successful design.

soaring
the bird out flies
its name

But the fullness from her spare approach extends beyond her own appreciation: it made me happy too. It evoked the feeling of nature, oh so dear to me. It brought back fond memories of my childhood cabin and the Japanese-style buildings at Tassajara hot springs where I go every year, deep in a mountain canyon. Unlike the more modern tiny house styles, this one resonated with me. And I’m sure it’s affected many others with similar tastes. Evocative and resonant – further signs of a good design.

Here is a short time-lapse video showing a day in Dee’s little house. It’s showcased in the National Building Museum in Washington, D.C.

You can also get more of a tour in the “Little House on the Trailer” video here.

I’ll be chronicling my own design decisions through this blog, but here is what I’ve learned so far from my gestating tiny house:

Where the storyteller is loyal, eternally and unswervingly loyal to the story, there, in the end, silence will speak.

6 thoughts on “Designing sparefully – a manifesto of sorts”