On being lost in a swamp – the beginning 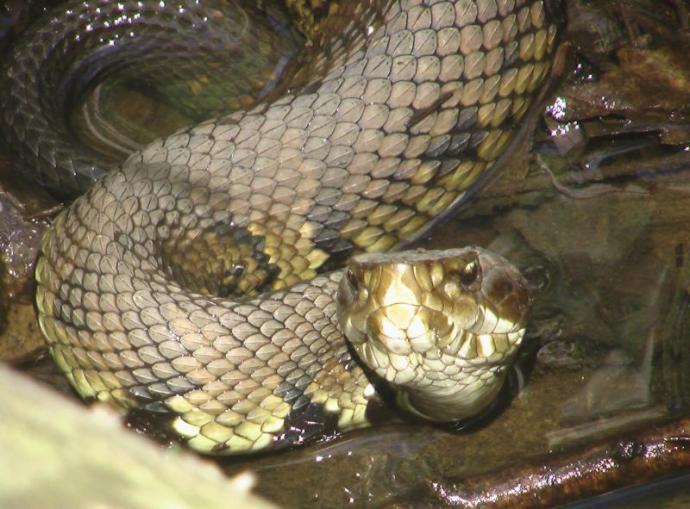 Way back in the days of yore, I spent a week lost in a swamp. I’m not exactly sure what this has to do with tiny houses, but it’s been coming up for me a lot lately and I thought I’d share my tale of adventure. I will try to find some brilliant analogy by the time I get to the final installment!
______________

I went to college in Ohio and being from Oregon, it was a little too far and too expensive to go home on breaks. I found out that another student, a tall, strapping blonde named Peter, nicknamed Bam Bam, led outdoor trips. I went on an awesome backpacking trip of his in the Upper Peninsula of Michigan, wading through bright yellow leaves, the crystal blue of the great lake shining through white birch trees. That trip went off without a hitch, other than someone, perhaps me, forgot to wash out the shampoo bottle we used to hold the Yukon Jack we warmed ourselves with after fast baths in the icy waters.

Spring rolled around and I was again adrift come break time. When Peter suggested canoeing in what was then the Congaree Swamp National Monument in South Carolina, I was immediately on board. We were joined by my friend Heidi, another refugee from the Northwest who I’d met on the previous trip; Sarah, calm, cool and collected; Eden, from New York City, who had never set foot in Central Park, let alone the wilds; Donald, the sweet but spacey art student and godson of the father of my best friend in high school, who I invited since he had just transferred and didn’t know anyone; and a couple others who have since faded into the vestiges of time.

We drove all night piled in the back of an old van that had no seats. Bleary-eyed in the morning, I got my first glimpse of the southeastern corner of our country. I was a little horrified that they served fried quail at a fast food joint.

We had arranged to meet a park ranger at a boat launch on the Congaree River. He explained how from there we would drift down a ways until we got to the entrance to the swamp. There had been a freak snowstorm the week before and the runoff was making the already mighty Congaree River run fast and high. He cautioned us not to miss the gap in the trees that led into the swamp since the current of the river is so strong you can’t paddle back upstream.

Now designated as the Congaree National Park, the swamp had become a national monument in 1976. Until the late 1800s, there were 52 million acres of floodplain forests across the Southeast. The park is 27,000 acres and includes the largest intact expanse of old growth bottomland hardwood forest left. Flooded regularly by the Congaree and Wateree Rivers that drop nutrient-rich sediment, it hosts one of the tallest forest communities in the world. If you go to the park’s website, it shows nice, tame pictures of trails and boardwalks, though it does have this warning:

Changing water levels may make paddling difficult. Occasionally, floodwaters from the Congaree River cover the park with a sheet of fast-moving water. Following the marked canoe trail may be challenging during flooding events. Water levels can fluctuate by more than 10 feet. Canoe trail markers may be underwater and the trail may be indistinguishable from the rest of the floodplain. When water levels are very low or after significant flooding occurs, fallen trees may impede smooth travel, forcing canoeists to portage. 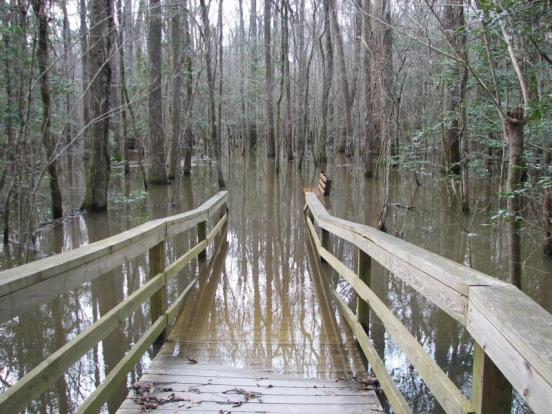 Flooding similar to what we experienced. Source: Congaree National Park

When we were there, it was 1983, way before the modern internet, and we never got that message, never saw the boardwalks. Either they hadn’t been built yet or we were just lucky enough to end up in some kind of demonic backstage version of the park, some parallel universe, the dark side of the vortex. But that’s getting ahead of the story…

Jolly Ranger Rick shoved us off, agreeing to meet us at noon on Wednesday at an old hunting lodge in the middle of the park. Laughing, he told us to watch out for poisonous snakes (the four deadly Cs: coral snake, copperhead, canebrake rattler, and cottonmouth) and not to grab the trees since the snakes would fall off into the boat with you, ha ha. Bastard. I have a huge snake phobia, almost as scared of them as I am of alligators, which were supposedly beyond the swamp, further down the river but really, why wouldn’t they be in the swamp? Isn’t that where alligators live? I promised myself I wouldn’t touch a tree for the next week, much less go into the water.

But hey, the sun was shining and we were drifting lazily, if rapidly, down the river like Tom Sawyer and Huck Finn on speed. All was laughter and happiness, the only blip being Donald’s habit of moving to the beat of a different drummer; amusing on land, it was driving me bonkers as I tried to paddle in rhythm with him. Let’s just say we went in a lot of circles.

We camped that night in a field by the edge of the river, totally peaceful and idyllic. We woke to low bellows. Poking our heads out of our tents, we were surrounded by a herd of steers with the longest, sharpest horns I’ve ever seen. They did not look happy. Peter gingerly tried shooing them away without getting gored. Success! Laughing, we congratulated each other on overcoming the horned bovines, ignoring the fact that in books, movies and video games, trials and tribulations always start off easy. It’s called foreshadowing. You’d think, as good little liberal arts students, we would have realized that.

I managed to talk someone into swapping canoes with me and I now was with Sarah, who proved to be a very compatible paddler. We set off to find the swamp. It was challenging since the willows along the banks were so thick, but eventually we found what looked like an opening. Since we didn’t want to shoot by the entrance, we made our way over and took stock.

Ranger Rick had said to just follow the main channel, called a gut, easy-peasey. What we saw was sort of an open area surrounded by bald cypress trees, their knobby knees sticking up out of water brown as chocolate milk. Spanish moss and other vine-y things hung down. No signs of dry land. It seemed like the right place so we ventured in.

Almost immediately the gut petered out and we weren’t sure where to go. It was hard to tell where the gut stopped and the flooded areas began. For some reason, someone was convinced we should bear left. It looked like we were following the channel but it got narrower and narrower. As the trees blocked our way, we had the choice of getting into the water to yank the boats through, or to sort of pull ourselves along by holding onto the trees and inching ourselves forward. Snakes weighing heavily on my mind, this was my worst nightmare. I tried cautiously pushing off the trees, trying not to shake them, and waiting for a pissed off snake to fall into my lap. Anything to avoid stepping into that thick water where you couldn’t see what was down there, like poisonous snakes that could climb trees and swim. Not to mention potential alligators blending in with all the fallen logs. Unfortunately there came a point where there was nothing to do but get out and haul those heavy, loaded-down canoes between the tight knit trees. I nearly threw up from trepidation.

This went on all day. The boats kept getting wedged and we had to rock them over the cypress knees. Not sure why we thought that was the right way to go but we persevered. It was getting dark but somehow we managed to find a patch of dry land in all that waterlogged vastness. Peter, trying to lift our spirits, boasted about having an iron stomach that could handle any water in the world. To prove it, he drank the swamp water and immediately started puking.

Exhausted, we made a fire and cooked dinner. It was pitch black out, no stars or moon. Someone passed around a bag of cayenne pepper to spice up our sorry gruel. I took a pinch, promptly forgot and rubbed my eyes, and promptly remembered as I started tearing up in pain. We huddled around the fire, not wanting to think what was lying in wait just outside the circle of light, listening to our fearless leader feverishly tossing and moaning in his tent. There were probably better ways we could have spent our spring break.

We snapped to attention as a piercing scream ripped through the night, sounding like a howler monkey being slaughtered. The same sound came from the other side of us. We stared at each other, frozen, silent, each lost in our own primal, atavistic terrors. My couple semesters of biology and the environmental literature class where we picked apart Deliverance and Zane Grey only stoked the fear. Now I was beginning to remember the narrative plot structure of all classic adventure stories, and not exactly comforted by the thought.