Skunks and a tiny house valentine

Valentine’s Day tends to annoy me with its Hallmark triteness but it’s notable in that it signals the start of skunk mating season.

I know this because I lived in a cabin in the redwoods that had a bit of a skunk problem. Okay, it was a big problem. About this time a couple years ago, all olfactory hell broke loose.

I couldn’t imagine how one skunk could be so prolific. Most of the time it was garden variety skunkiness wafting up through the house, but on one memorable night (especially to my friend Jim who was unlucky enough to be visiting), we awoke, eyes streaming, to a god-awful acrid stench. It smelled nothing like skunk and everything like burning plastic. I learned that night that skunks, when they ratchet up to their highest potency level, are one of the most common reasons the fire department gets called out.

My landlord was convinced he could take care of the problem. I had to endure weeks of failed attempts at homespun remedies involving sifted flour, mothballs, bright lights, and boom boxes playing heavy metal.

Inevitably, like the cat, the skunk came back the very next day.

I finally reached the end of my rope and my landlord called in a professional trapper, the humane sort who uses live traps and carts his conquests off to some distant happy skunk realm.

Each night for the next seven nights, the trapper caught a skunk under the house. All females. All sisters.

Turns out they had been living in peaceful harmony all year until Valentine’s Day approached. Driven mad with hormones, the sweet siblings turned on each other to see who would get the nice warm lair to raise her litter in. Goodbye bucolic nature…hello stink bombs.

Life in the woods

Originally intended to be a summer cabin, my place had turned into a year-round rental. It had a cavernous living room with vast windows on three sides, looking right into the trees. In the three years I lived there I saw deer, coyotes, a mountain lion, acorn woodpeckers, a hawk that tried to get in the window, and a rabbit that kept coming to the door and always looked blue in pictures. 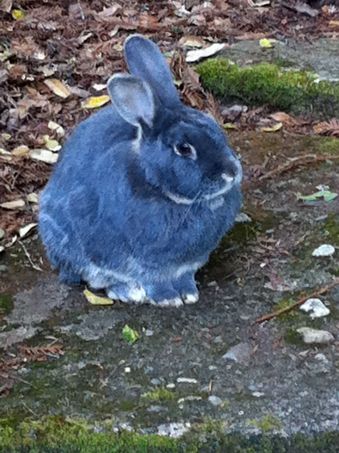 There were also lots and lots of spiders, not to mention the seven skunk sisters, and I nearly froze from lack of insulation. I lost power every time there was a storm, and the threat of forest fires and falling trees kept me on my toes. It was not always comfortable, but I felt more alive there than in any other house I’ve lived, a part of the ebb and flow of the seasons and the natural world around me.

Back to the city

Last year I left the mountains to return to the Bay Area and had to adjust to city life again. I shouldn’t complain; there aren’t any skunks or spiders. The power has never gone off. I’ve stopped worrying about widow-makers every time the wind comes up.

The front windows look out onto large, tame trees along my street. Fortunately I do still get glimpses of nature. When I moved in, I was welcomed by mourning doves nesting in the porch light.

After a camping trip last summer (the music festival that started me on my tiny house journey), I was standing on the porch emptying out my water jug on to the plants below. I was spacing out and must have been very still because a hummingbird came and drank from the stream of water, in no hurry to leave. Last Sunday, much to my surprise, six wild turkeys paraded nonchalantly down the sidewalk.

But I also have a floor above me so I can’t hear the rain, most of the windows look out on buildings or on the neighbor’s back yard that is nothing but bark chips, and there isn’t any place for me to sit outside. A part of me is slowly withering.

There is a technique in theater called breaking the fourth wall. In traditional theater, we, like voyeurs, spy from a safe distance into the world created by the actors, a world self-contained by the fours sides of the stage. The fourth wall is broken when one or more of the actors suddenly engage directly with the audience. This disrupts the safe buffer between their world and ours.

Depending on how it is done, it can be uncomfortable, awkward, exhilarating, illuminating, thought provoking, inspiring, startling, or scary. It can make us laugh or make us cry. It can make us feel exposed. Or connected. It can play on our naïve desire to believe, or force us to confront our old jaded beliefs. It can leave us wanting more. Breaking the fourth wall is a lot like falling in love.

Tiny houses perform this lovely feat of breaking the fourth wall between you and nature while still keeping you sheltered and protected. This is why I love them.

In her workshops, Dee Williams talks about the myriad sounds of rain she hears on her roof, the intricate tendrils of frost she wakes to on her skylight, the integral way she knows which way the wind will hit her house and the path of the sun in different seasons. This greater awareness of nature appears to be a common theme among tiny housers.

Okay, so this was on my windshield, but one day…

Whether you’re in an urban environment or the country, tiny houses let you feel more engaged with nature and the elements. Something about the metal roofs, the short distance to the outdoors on all sides, the windows from every vantage point, the slight rocking on the jacks. Even in the middle of the city, they let you experience the frisson of a dramatic storm, the soft new growths of spring, the tempo of the earth turning.

It’s not always pleasant, I’m sure. There is always the potential of spiders and sex-crazed skunks, of mice in the sock drawer. But isn’t that worth it to feel more connected?

My tiny house is still just a twinkle in my eye but it’s already given me so much. I don’t doubt there will be much anguish and tearing out of hair along the way, but it’s made me more willing to take risks and to tune in to what’s me. It’s made me question how I define home and community. It’s reconnected me with my childhood and family and old friends. It’s given me some amazing new ones, including a whole new tribe stretching around the world. It’s teaching me new skills. It’s challenging me to throw off the tethers, walk more lightly on the earth, and offload things that no longer have meaning. It’s unleashing my inner camel explorer and allowing me to bring together my passions for art and nature. It’s taken down that fourth wall to reveal a future more aligned with my dreams.

So though my tiny house is nothing more than graphite and graph paper, it’s the most perfect of valentines:

…it whispers the promise of things to come.

One thought on “Skunks and a tiny house valentine”