The eagle has landed: the trailer comes home to roost 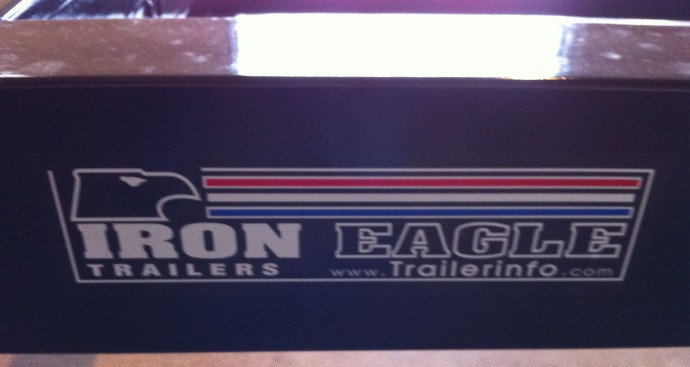 Now things are starting to get real. Last weekend I picked up my trailer and delivered it to my parents’ garage, where I will start my build this summer. Lots of excitement around that, as well as some nervousness and a funny sort of limbo feeling since it’s still a little ways off. I’m also realizing just how much research and final design work I need to do in the next few months!

Since I’ve found it very helpful to read about other tiny houser experiences, I thought I’d pass on what I learned about buying and towing a tiny house trailer.

The genius that is Iron Eagle Trailers

The trailer is the foundation of a tiny house. I knew I wanted to buy a new trailer rather than trying to convert a used one, for both peace of mind and to save time. I chose to go with Iron Eagle Trailers outside of Portland, OR. They are the company that Portland Alternative Dwellings and others have used, so I knew they were already experienced in the customizations required for tiny houses. It was also convenient that they are only about 45 minutes from my build site.

Turns out this was a brilliant decision. Iron Eagle makes extremely well-constructed and affordable trailers using box tube steel framing that resists twisting and flexing forces better than channel or angle iron framing, while also completely enclosing and protecting the wiring. Their trailers last for decades. Iron Eagle tongues are 12″-18″ longer than most (okay, that sounds funny), which is easier for steering and backing, reduces the weight on the vehicle from 15% of the trailer weight down to 10%, and allows room on the tongue to build a bay window or tool shed. They use LED lights that will likely last the lifetime of the trailer and are maintenance-free and much brighter than incandescents. They provide manuals from the axle company which are a great resource for maintenance questions. The Iron Eagle website also has a good list of what to look for when buying a trailer.

I was most impressed with the level of customer service provided. Rob Mandzij was great about answering lots of questions as I was figuring out the ordering details, during my frantic scrambling to find a tow vehicle with the proper hitch (more about this below), and then taking the time to go over everything I needed to know about hauling and maintaining the trailer on the day I picked it up.

Rob is very interested in customizing trailers for tiny houses and has been working with Dee Williams at PAD, Derin Williams at Shelter Wise, LLC, and other Portland tiny house builders to continually come up with new innovations that provide the necessary structural integrity while keeping the weight low. He has a couple of options for extending the frame if you want to build out to the full 8.5′ width limit. On Dee’s recommendation, he used smaller cross ribs to reduce weight and came up with a way to attach them to avoid crowning of the side rails, which can happen from the typical way they are welded on. He also welded the tongue jack on the inside of the tongue so that there is room for stabilizer bars on the sides if needed (often the jack is attached to the outside of the tongue).

When I ordered my trailer, Rob worked with me to determine how far to move the front axle forward to handle the weight of my loft over the front half of the trailer without compromising the space I needed for my entrance door and bathroom. He also had holes drilled in the side rails where the floor framing will be attached, and reinforced them with welded washers on each side. (Note: for more about this approach, check out PAD’s tiny house construction e-guide, Go House Go. I found it to be one of the most solid, secure attachment methods out there. There’s a lot of really great information in the guide – well worth the price.)

There appears to be a common phenomenon among tiny housers just starting their build where they experience fluctuations in the space continuum – specifically, the shrinking and expanding of their trailer. This has happened to me already and will probably continue as I get the floor down and the walls closed in. From my design work so far, I thought I’d come to terms with living in a space about 16′ x 8′. Then Rob sent me a photo of my trailer when it was done:

Something about the distance and lack of scale made it look very tiny and insubstantial. I had a flash of panic. Would it be solid enough to hold my house? Can I really live in that?

Once I saw it in person, all that quickly changed. It’s actually incredibly hefty and felt much bigger than I expected. Turns out a 16′ trailer ends up being more like 16.5′. That extra few inches can make all the difference in a tiny house; I felt like I’d won the lottery.

While many tiny housers build their walls up entirely between the wheel wells so that they can stay under the 8.5′ road legal width limit, I chose to increase the width. If your house width at its widest point, typically the eaves, is between 8.5′ and 10′, you need to get a special permit in most states (if you go over 10′ you get in the wide load realm, which requires pilot cars, certified drivers, etc.). At least in Oregon and California, where I’ll most likely be, this just involves notifying the state a few days in advance of the move and paying a small fee. I decided that this was worth it for the extra space. 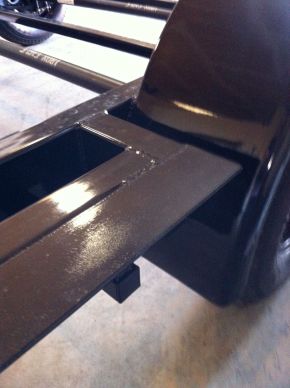 Rock solid. This shows the method PAD and Iron Eagle developed to add extensions along the side. There’s another method Iron Eagle has done that requires less steel if weight is a concern, but you need to frame your house differently; not a big deal to do, but I decided to go with what I was familiar with.

These are the specifications for my trailer:

Here are a few other things I learned about trailers and towing:

1. Work directly with a trailer manufacturer, not a dealer. There are too many things that can go wrong if you have someone in the middle trying to explain what’s needed to the manufacturer, especially if neither of them are used to customizing for tiny houses. Even though Iron Eagle has dealerships all over the western US and Canada, Rob said that tiny housers should call their manufacturing headquarters in Fairview, Oregon: (503) 667-9358. (On a somewhat related note, be sure to ask your manufacturer what colors of trailer and wheels are available, if that matters to you. Though white wheels would have been fine, something made me ask if they came in black and they did!)

2. Know your hitch requirements. I didn’t fully appreciate the variation that occurs in tow components and hitches, which led to a crash course at the last minute. This might vary with other manufacturers, but this is what was needed for my trailer:

3. Plan ahead if you’re renting a tow vehicle. Since it was just the unloaded trailer, I thought I could borrow a RAV4 or Tacoma truck from family members until I learned all about the specific hitch requirements. While I could have rented or purchased everything I needed to outfit either of these vehicles, I was running short on time and figured I would just rent a truck already set up. From things I’d seen on tiny house forums, it sounded like no big deal to rent one from U-Haul or other rental companies. Wrong. On the day before I was to pick up my trailer, I called over a dozen places in Portland. They all said that they’ve stopped renting trucks to pull trailers due to liability concerns. Supposedly some U-Haul places will still allow it, but the ones I called had 2″ balls welded on. When all seemed bleak, Dee got the name of a local rental place in Portland that Brittany at The Bayside Bungalow had used to move her tiny house. Fortunately that worked out perfectly. Moral of the story: get friendly with truck owners or leave lots of time to find a rental!

4. The trailer brake failsafe system. When you hook up your trailer, you connect a thin cable to the tow vehicle that is attached ultimately to a little battery on the inside of the tongue. Should there be a catastrophic event where the trailer becomes completely separated from the tow vehicle, the snapping of that cable sends a signal to the battery to immediately discharge all of its juice into the trailer brakes, slamming them on and stopping the trailer from running into anything (even unloaded, a half ton trailer moving at highway speed could do a lot of damage). I just think this is super cool. For some reason it makes me think of an octopus squirting out its ink. 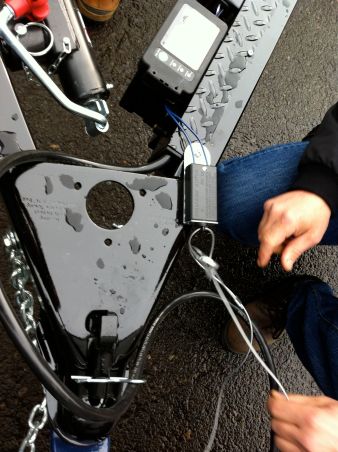 5. When picking up your trailer and towing it to its final destination, allow more time than you think!

Bringing it on home

So after renting the truck, getting trained on the trailer and doing all the final paperwork, I drove off the lot with the first tangible piece of my tiny house. Dee was along for the ride and caught me by surprise:

It was odd driving it down the Columbia River Gorge highway since the truck was so big I couldn’t feel anything behind or see the trailer out the back. I only knew it was there since it appeared in the little convex side mirrors all distorted and tiny. I kept thinking how different this was going to be once I towed my completed house for the first time.

We made it to my parents completely uneventfully. The only hiccup of the entire operation was backing it into the garage. This involved a very tight 90 degree turn into a narrow door without hitting my dad’s beloved car. I made a few attempts but have yet to develop my backing up skills. Because we were tight on time, Dee jumped in and saved the day. 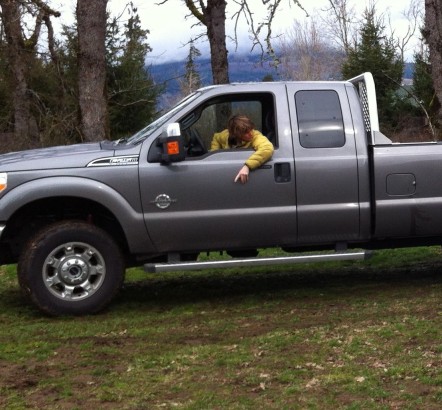 Dee backing it up. 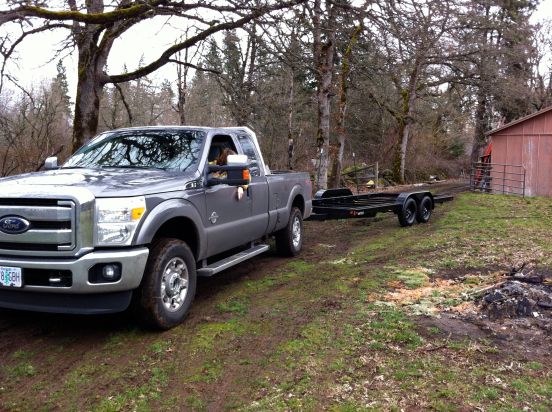 At last. The beginnings of Naj Haus.

Later, after returning the truck, I went back to really look at my future home, trying to picture what it would look like in the end. It’s kind of an awesome thing. I took dozens of photos and measurements to be able to complete my final construction drawings since I’ll be doing this remotely from California. It was a very strange feeling to leave it after all the time and effort to get it to its roost, but there’s a lot to prepare and I’m sure the time will fly. 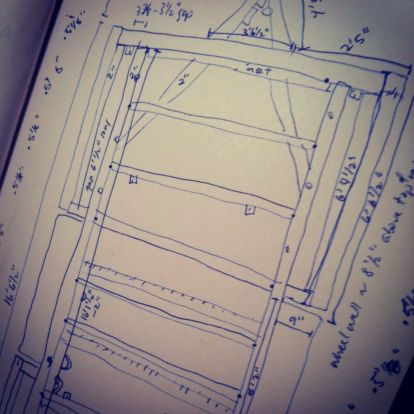 Fodder for the next few months.

I gave a big shout out to Rob and Dee when I ordered my trailer, but then they went above the call of duty and helped me more. Thank you both; I’m deeply grateful. And to my parents for being so accommodating, and for the support from all of my friends and family. I love that my fledgling tiny house is surrounded by all this good energy.

33 thoughts on “The eagle has landed: the trailer comes home to roost”